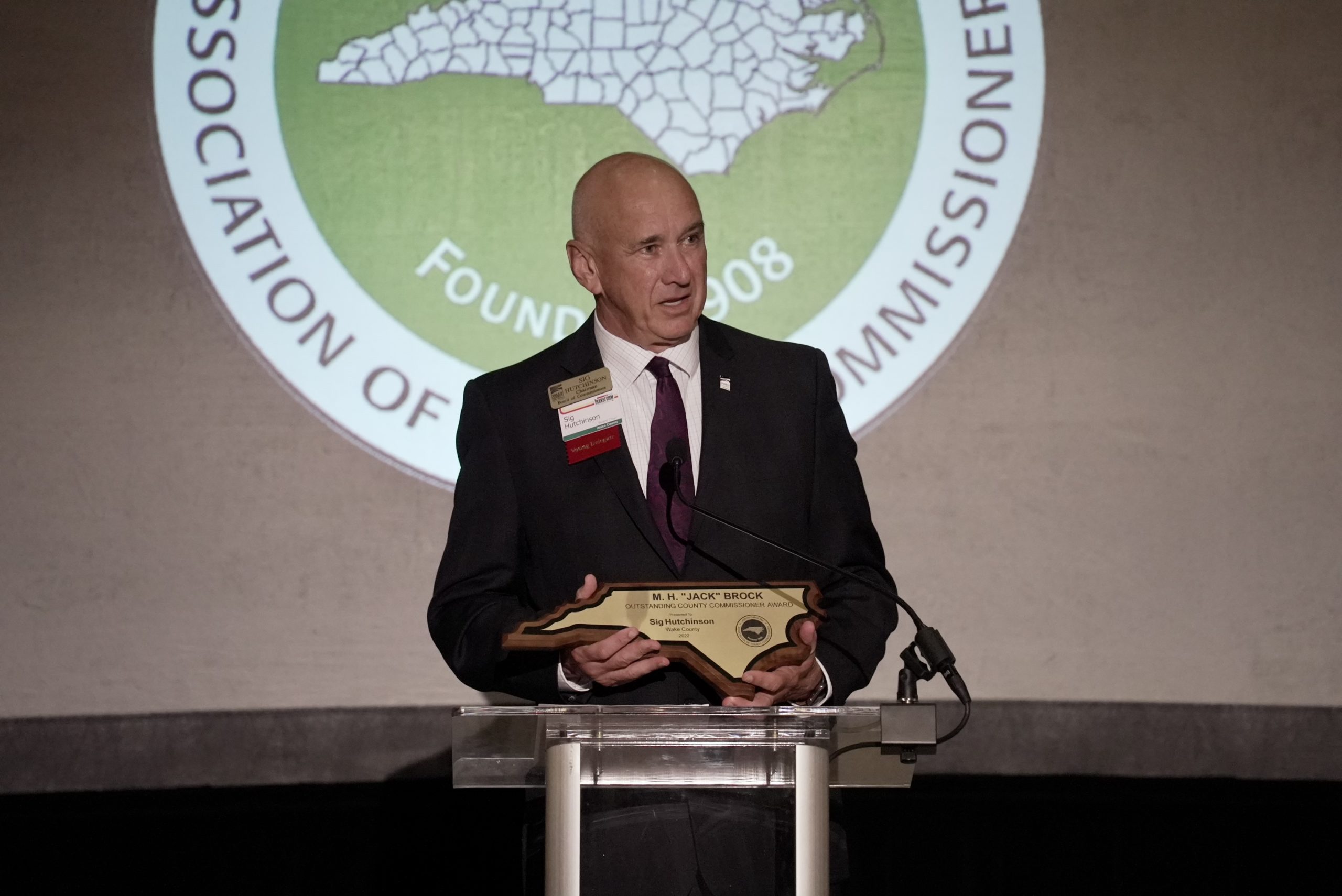 The award is given each year to a commissioner who has demonstrated special achievements and efforts on behalf of county government throughout the state and/or region. Commissioner Hutchinson’s illustrious public service career certainly underscores why he was chosen for this year’s honor.

Prior to being elected to the Wake County Board of Commissioners in 2014, Hutchinson dedicated more than two decades of his time and attention to preserving open space, expanding the county’s greenway system and otherwise pursuing efforts to make the community healthier and more livable. His passion for this cause stemmed from an experience he encountered in the mid-nineties trying to access “single track” bike trails in the Triangle area. Hutchinson was told by a Falls Lake park ranger, “You’ll never ride here, this trail was built by the Triangle Greenways Council.” The situation spurred him to action, seeking pathways to gain leadership on the council and influencing development of and access to multi-purpose greenways.

One project led to another and Hutchinson found himself making connections with various state agencies and community stakeholders. He was fueled by the desire to improve the well-being of Wake County residents and before long, he took on increasing leadership roles and advocated for bond referenda to fund more significant open space, park, and greenway projects.

Commissioner Hutchinson’s service to community has led to him holding leadership roles in numerous regional and state boards and associations, including the Triangle Land Conservancy, Advocates for Health in Action and the Research Triangle Regional Public Transportation Authority. Just this past spring, he was integral in bringing the National Association of Counties’ Healthy Counties Forum to North Carolina – an important event that brought county leaders from across the nation together to network and learn about strategies to improve residents’ lives.

NCACC Strategic Communications Specialist Carl Wilkins sat down with Commissioner Hutchinson recently to learn more about his public service calling and his reflections on his time as Wake County Commissioner, a chapter that is coming to a close with his decision to forego seeking reelection. Here are some highlights from their conversation.

Wilkins: What was your inspiration for running for county commissioner?

Hutchinson: My career has been in communications and for almost a decade, I taught the Dale Carnegie course, “How to Win Friends and Influence People.” It helped me tremendously in terms of honing my skills for public speaking and building positive relationships to get things done. In the ‘90s, I found the greenway system and while it had 270 miles on the map, I wanted to see what I could do to build more. I became the go-to guy to do bond referendums, talking with the commissioners and city council to do an open space bond or even a transportation or affordable housing bond. I’d say if you’ll put the bond on the ballot, I’ll run it, raise the money, run the campaign. We did it and were successful. I got to a point where I thought we needed to do more investing, particularly in transit and affordable housing, so I decided to run for commissioner. I recruited three other colleagues and we ran a coordinated campaign called More with Four Team. We swept all four seats and in 2014, took over a majority of the county commission.

W: Tell me about some of the accomplishments you’re most proud of.

H: We have an amazing park system in Wake County. We have over 7,000 acres of permanently protected open space. We’ve done a series of bonds since 2000 to continue our greenway development. In 2016, we did a $2.3 billion transit referendum on ½ cent sales tax and we’ve been implementing that since it passed. We’ve focused on affordable housing and we’ve added a penny towards the effort and created a department to support it. We had a goal of creating 2,500 units of affordable housing in five years and we’ve accomplished it in three. We’ve also developed a food security program and focused on pre-K programs. All those things I feel proud of, what I’ve been able to do, along with my colleagues and along with so many community partners here in Wake County.

W: How did it feel to receive the Outstanding County Commission-er award?

H: It was a complete shocker. I had no idea and I was honored. One of the key points I want to get across is for people to get involved in the North Carolina Association of County Commissioners. I also got involved in the National Association of Counties. Together, we got the national Healthy Counties Forum here, which was amazing. Everybody loved it and I think that probably had something to do with me being selected for the award. I was not expecting it and was totally blown away and honored to receive the award.

W: How impactful was your involvement in NCACC?

H: We do this job because we want to change people’s lives for the better. You really have to learn the job and best practices and you can do that with the Association. You have the opportunity to interact with elected leaders from across the state and everyone is so open and interested in developing relationships.

W: What are your plans after retiring as county commissioner?

H: Well, whatever my sweet wife Nancy wants me to do! We’ll travel and otherwise dial it back. This work takes time. It’s not easy and it’s incredibly rewarding. I’ll continue as chair of our regional transit. We still have a commuter rail which we are going to be doing this next year as well as continue to implement the transit plan from 2016. And there’s the Triangle Bikeway, a 16 foot wide green bike superhighway which runs 10 miles from the center of Raleigh out to Research Triangle Park. So there’s a lot to do!

Click here to read the full PDF version of the Fall 2022 issue of CountyQuarterly.