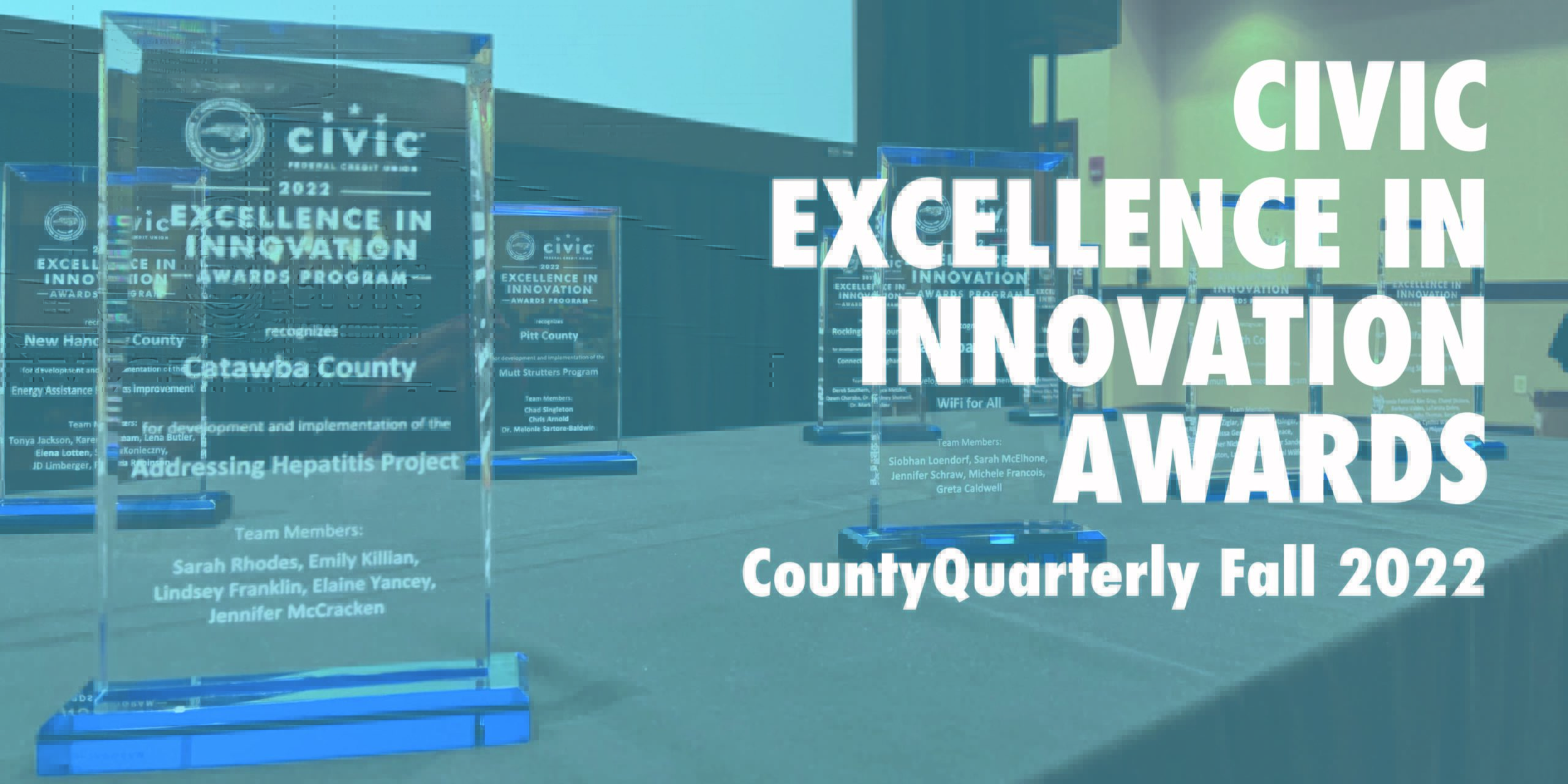 Congratulations to the 2022 Civic Excellence in Innovation Award Winners

Contrary to popular belief, innovation and invention are distinctively different. According to Merriam- Webster, invention stereotypically refers to something that has not previously existed, while innovation can refer to a change made to an existing product or idea. Innovation requires historical knowledge, understanding, and resourcefulness. Over the last year, many counties have done more with less, stretching their imaginations and resources to overcome challenges and provide novel programs for residents.

In partnership with Civic Federal Credit Union, the NCACC offers the Excellence in Innovation Awards to recognize and celebrate successful county programs that demonstrate innovative solutions and cost/resource savings for counties.

Cash awards of $1,000 are given to each of the ten winning programs, and they are recognized at the NCACC Annual Conference. County programs that qualify for the awards fit the following descriptions:

In partnership with UNC-Chapel Hill School of Social Work Innovations Lab, Cabarrus County piloted the Poverty Stoplight (Aspire) life map survey tool developed in Paraguay to assess a family’s level of crisis and root causes of poverty. The tool assesses families using six key indicators in income/employment, health/environment, housing/infrastructure, education/culture, organization/participation, and interiority/motivation. This assessment is multi-dimensional and yields results for the family to review and prioritize a family plan to address the family’s deprivation.

From July 2020 to June 2021, the county’s Prevention Unit served 165 families. 88% (or 146 total) families were successfully diverted from entering the foster care system, reducing trauma, saving on placement costs, and reducing the instances of repeat maltreatment reports.

This program has grown significantly, to the point that there was a waiting list for participants in FY21, and the county hired a third prevention social worker to continue to expand the program and serve more families.

Catawba County’s WiFi For All

According to NC Broadband Infrastructure data, Catawba County has a “Broadband Availability and Quality” score of 70.2 and ranks 39th in the state on availability. Now more than ever, school children without access to the Internet are at a great disadvantage and do not have the most basic of tools needed to succeed. For individuals in the workforce, access to technology is equally important to their success.

The Wi-Fi for All project is a two-pronged effort to decrease the gap in the digital divide by partnering with community organizations to establish spaces with free public access wireless internet and to provide internet enabled devices for individuals to borrow from the library.

Beginning in August of 2020, the library worked with an internet service provider to set up a hard-wired line of internet service to seven locations with public parking areas in underserved communities. A separate company was contracted to set up network switches and access points at each location, which now broadcasts free, unlimited wireless internet to the parking areas on a single network called Wi-Fi for All.

The library also expanded its well-established technology lending program to include 118 internet enabled devices to help citizens get connected. The majority of patrons who check out the Wi-Fi enabled tablets indicate that they were using the devices for education, job seeking, health and wellness information, communication, and access to library resources and materials.

Since the WiFi for All service was established, Catawba County has tracked consistent usage at our partner locations providing free Wi-Fi in their parking lots. They have reached more than 15,000 visits logged each month by 1000+ different devices.

While responding to the COVID-19 pandemic, Catawba County Public Health also noticed an alarming uptick in the number of Hepatitis A cases that were being reported in the county. Most years, Catawba County only sees a handful of cases. But in 2020, there were 34 cases; by the first half of 2021, there had been 63 more.

The county responded by enhancing partnerships with community organizations to offer vaccines to their most vulnerable populations. Partners that offered harm reduction, syringe exchange, and food assistance are now equipped to provide hepatitis vaccines and education as well.

Since the project began in July 2021, Catawba County Public Health has administered 69 Hepatitis A vaccines to the most at-risk populations through its community partnerships. The partnership to provide the vaccine alongside harm reduction has resulted in another 91 individuals receiving the Hepatitis A vaccine. These vaccinations, in addition to prevention education, have resulted in a dramatic decrease in cases. Since the outreach and vaccination efforts began, Catawba County’s Hepatitis A rate has plummeted from 46.4 per 100,000 residents down to 5 per 100,000 residents.

Production agriculture contributes $140 million to Cleveland County’s local economy each year. County commissioners have supported grass-roots efforts to protect and preserve farmland, and recently established the goal to include agriculture and agribusiness in the county’s economic development efforts, which had been largely focused on attracting industry and retail. The NC Cooperative Extension, a partnership between state and local government, was identified to champion this effort and responded with aggressive resource development efforts to grow and diversify farms and farm-related business.

Led by County Extension Director Gregory Traywick, these efforts include:

A blended stream of funding to help construct a $1.8 million pavilion in Uptown Shelby that houses Foothills Farmers’ Market, one of the largest and best in the region. The grower-certified market operates year-round, providing a direct-to-consumer sales outlet to more than 75 vendors and serves thousands of shoppers each year.

A $228,750 USDA Rural Development grant that helped a local family-owned farming operation develop a value-added mulch bale containing a blend of rye straw and farm-raised switchgrass. This project reduced the farm’s dependence on purchased straw and significantly increased production. Wholesale of this new product to Lowe’s and Home Depot stores throughout the region generates $1.1 million in revenues annually.

A $238,786 award from NC Tobacco Trust Fund financed major improvements to the livestock arena at the Cleveland County Agricultural Fair.

Agribusiness operations contribute $5 million annually to the region’s farm income in the form of direct payment to farmers. By providing the region’s farmers with access to important resources, like the timely application of prescription fertilizers and soil amendments that are customized to the specific plant nutrient needs and soil conditions on their farms, these projects help maximize crop yields and quality; essential elements of farm profitability and long-term sustainability.

Forsyth County EMS Community Paramedics program addresses the needs of those who have become dependent on Emergency Medical Services by addressing the issues that are causing them to frequently call 911. Community paramedics also divert patients from the emergency department when other services may be more appropriate to address their underlying needs, such as behavioral health and substance use services.

Community paramedics help to “medically clear” patients so they can be seen by an outpatient behavioral health provider. This helps avoid unnecessary costs to the patient, overcrowding in the emergency departments and unnecessary delays in reaching trained personnel who specialize in behavioral health. This improves the overall outcomes for people who are living with these diagnoses.

Realizing the need to maintain a presence with our patrons during the COVID-19 pandemic, all five locations of the Halifax County Public Library System reimagined story times. With the help of county funding as well as grant monies, they purchased video equipment to produce quality virtual story times.

Staff reached out to educators in the county to develop partnerships to ensure the children’s needs were being met during this unprecedented time. Each location presented recorded story times, crafts, demonstrations as well as library informational videos. They offered take home craft kits for patrons to pick up at each location to go along with a story time presentation. The staff also held “live” events on Facebook to engage and educate audiences.

Not long into this journey, library staff realized that their “reach” extended far beyond the borders of Halifax County as well as the state of North Carolina. There were views from the East Coast to the West Coast and many points in between. Comments came from several other states in the US and even developed a following in Ghana. In total, Halifax County presented 686 programs with a virtual attendance of 132,248.

To address this issue, county staff began to digitize the application process, which condensed a nine page form into a user-friendly electronic application. Once complete, the data was accessible immediately for review and initiation of payment. Streamlining each part of their process allowed New Hanover to become the first county in the state to issue electronic energy assistance payments directly to Duke Energy.

In its entirety, the process improvement reduced payment processing time from three weeks to just one day. It has provided necessary assistance to vulnerable residents much more quickly, reduced mistakes on applications, and allowed the county to realize rebates by submitting payments with P-cards instead of paper checks.

By early 2022, New Hanover County had processed 1,459 payments via the new process, and created procedures with Duke Energy that can be replicated in other counties to improve processes statewide.

The primary mission of Pitt County Animal Services is to “safeguard public health and safety by supporting the education of citizens on responsible pet ownership; to protect the community’s animals from cruelty and neglect, and to house, care, place or provide humane resolution for animals in its care”.

To further this mission, Dr. Melanie Sartore-Baldwin, an associate professor of kinesiology at East Carolina University, developed the idea of a for-credit, service-learning fitness walking class that works in partnership with Pitt County Animal Services to help meet the needs of the dogs housed in the Pitt County Animal Shelter and university students. Affectionately known as “Mutt Strutters”, this program is now comprised of 26 community volunteers and works in conjunction with the fitness walking class to provide additional enrichment for the shelter dogs.

The combined efforts of Dr. Sartore-Baldwin’s students and community volunteers has led to extraordinary results. Euthanasia rates at the shelter have decreased dramatically, and adoption rates continue to climb. Both students and pets have benefited from the increased physical activity, and many students have continued to volunteer with the shelter following the conclusion of their class. In 2022, the shelter will expand to more than double its capacity. Funding from the university, county, and community donations continues to help improve outcomes for Pitt County Animal Services.

For years, Rockingham County Government received citizen complaints and anecdotal evidence indicating that thousands of households across the county lacked access to affordable, high-speed broadband. To get better data, the Rockingham County Information Technology Services Department (ITS) administered a comprehensive citizen survey that was promoted throughout the county. This survey showed that the need for high-speed internet access is much greater than what was indicated by federal and state maps. Using the survey data, the ITS department designed new address-level broadband maps, which identified clear areas for which high-speed internet was not available.

The Connect Rockingham project identified 3,250 households that needed access to internet, and the county began to build a coalition of community partners to address the need. Following a thorough RFP process, a $14.4 million partnership between Rockingham County, the Reidsville Area Foundation, Rockingham Community College, Rockingham County schools, and Charter Spectrum was established.

With the majority of the funding coming from the internet service provider, each of the 3,250 households identified will have access to high speed internet by early 2024. As more underserved addresses are discovered, additional phases and funding streams can be made available to help.

The PORT contacts individuals experiencing an overdose within 24-72 hours to provide critical services. In 2021, the team served 35 clients, distributed 47 kits to community members, and assisted in 73 opioid reversals. The team has also provided extensive training in the public schools, where 90 staff members are now trained to recognize and assist in opioid related incidents.

To read the full issue of this edition of CountyQuarterly, subscribe to the magazine at this link.